3 highlights of the Colonna Palace in Rome 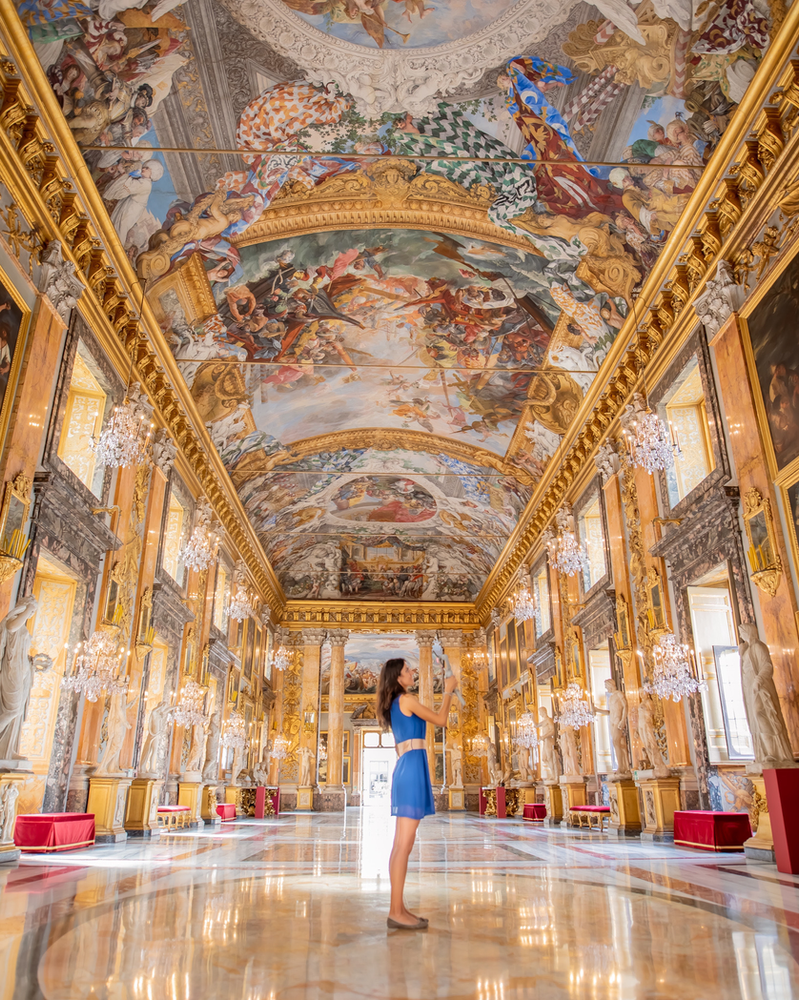 Colonna Palace: a hidden gem in the heart of Rome

We are in the Colonna Palace in Rome, a palace belonging to the Colonna family since the Middle Ages and still inhabited by them today!

Who are the Colonna’s?

You need to know that in Rome through the centuries there has been a lot of noble families, and each one of them had their family palace. The biggest one is the magnificent Colonna Palace in Rome!

The Colonna’s have been such an important family for the history of Rome.

To give you a couple of examples:

This means that Rome returned being an important city and raised from its ashes thanks to that.

The next very important member of the Colonna family after Pope Martino V was Marcantonio II Colonna. He was appointed admiral of the papal fleet for the famous battle of Lepanto in 1571. This was a crucial battle that took place in the Greek sea.

Let e give you some context. Some years back, the Eastern Roman empire fell in Constantinople and the Ottomans were moving towards the rest of Europe. The Ottomans aimed at expanding into the Mediterranean.

As a consequence, Pope Pius V put together the Holy League, to contrast the Ottomans. And he appointed Marcantonio Colonna as admiral of the fleet.

The battle was a success for the Holy League: the Ottomans were defeated and Marcantonio returned to Rome triumphantly. In fact the Pope organized triumphant parades resembling the ones of the ancient Roman empire!

What would Rome look like if Martino V wouldn’t have done that?

And if Marcantonio did not defeat the Ottomans that were about to expand in Europe? Certainly very different!

This was to give you a little bit of context about the family.

Now, what are the highlights of your visit in Palazzo Colonna in Rome?

Above all, the Gallery is certainly the real jewel of the whole palace. It’s a 70-meter long triumph of Baroque, everywhere you look there’s beauty expressed through colorful marbles, chandeliers, paintings, frescoes, golden framed mirrors.. you just don’t know where to look! 😊

When you are in the gallery, for sure you will notice the cannon ball that is casually laying on the steps at the end of the gallery. What is this cannon ball doing in here??

It was shot accidentally in 1849 during the Battle on the Janiculum hill between the French troops supporting the Pope and the army of the Roman Republican lead by Garibaldi.

The French troops in fact aimed at the Garibaldi troops on the Quirinal hill, which is just behind this palace and this cannon ball ended up in here by mistake.

And this cannon ball is here to tell us how dramatic and destructive war can be, it is a material example of how real and damaging war is, especially in contract with so much beauty!

3) The Painting of the Bean Eater

But now let’s have a look at the paintings. Of all of these paintings there is one that is particularly popular in the Colonna Palace in Rome and it’s a painting that probably you would never expect to find in here 😊

Among so much luxury, you would never imagine, but the most popular painting is this one: the Bean Eater of Annibale Carracci.

This painting looks so simple, but it actually tells us a lot about everyday life a farmer in the 1500s.The guy is eating a beans soup. On the table onions, bread, wine.
Why is this such a popular painting? Because it sticks out from the rest, not just in here, but it also sticks out from the paintings in the 1500s, a time where only noble people would afford to have a portrait.

4) The room of the throne

At some point you will enter a room where there’s a chair facing the wall. That is the chair of the Pope, placed in that position so that no one would sit in there, and it would be turned around only when the Pope would sit on it.

You can visit Galleria Colonna and the other rooms of the Palace only on certain days and times of the week, usually Saturdays, so it’s good to plan ahead and book your tickets in advance. This is the website where you can find all the updated info about opening times and tickets: https://www.galleriacolonna.it/en/

You may think tickets are a little expensive, but I can assure you it’s totally worth it! 😊

Let me know if you go and visit the Galleria Colonna and what you thought of it!