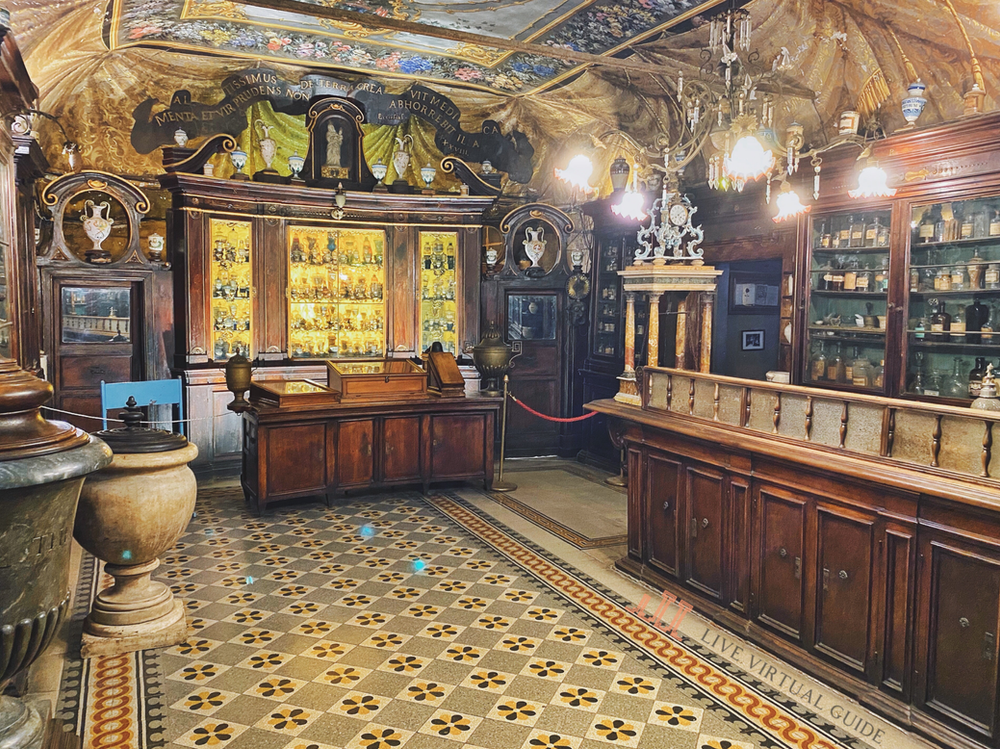 If you are looking for a REAL hidden gem in Rome, the Ancient Pharmacy is a must-see for you.You don’t buy a ticket at a cashier, you don’t enter big museum doors, the signs with indications on how to get in are quite small and hidden.. It is often by word of mouth that visitors end up into this ancient pharmacy.

We are in Trastevere, in the Piazza that takes the name from its church, the church of Santa Maria della Scala, which literally means: St Mary of the staircase. Originally in this square there was a house with a staircase, and on this staircase there was an image of the Virgin Mary which seemed to make miracles. This is where the name comes from.

In the 1700s a friar-runned pharmaceutical school was founded next to the church. The chief of this school was Friar Basilio, who lived until the age of 77 years old, which at the time was a big accomplishment – he must have taken care of himself well with his medicines!

The Pharmacy stayed open also during the times of plague and it did not only sell medicines: the friars also made pharmaceutical research and they became so experts (there were between 30 and 40 friars working in there), and their medicines so high quality, that eventually in the 1800s this ancient pharmacy became the official pharmacy of the Popes!

The pharmacy kept running with ups and downs due to historical events in Rome, until 1954 when it was suspended and never started running again due to the modern hygiene standards that the friars haven’t managed to meet.

The tour inside the ancient pharmacy is given by a friar of the Discalced Carmelites order, the order that has been running the pharmacy since its beginnings. You will have to get in touch with him through this email: anticafarmaciadellascala@gmail.com to ask for tour dates and times.

To enter the pharmacy (once you booked) you have to go through the little atrium of the modern pharmacy and ring on the door on your left.

The friar will tell you the story of the pharmacy and show you the medicines that are still kept in there since the closure – some of them are over 200 years old! Each medicine has a story and a specific function, including the Theriaca, the medicine created by Andromacus, the personal doctor of the emperor Nero.

One of the ingredients of the Theriaca was snake meat, and this potion seemed to be working, considering that it has been used for over 1000 years!You are also able to smell what’s left of this medicine, the same smell that Nero and guess how many other people smelled during so much time!A very immersive tour through history of medicine!
But I won’t uncover anymore, the friars will give you a fantastic tour of this incredible place!

Have you ever been to this ancient pharmacy?Let me know in the comments below! 🙂