The House of Monsters and the Bibliotheca Hertziana 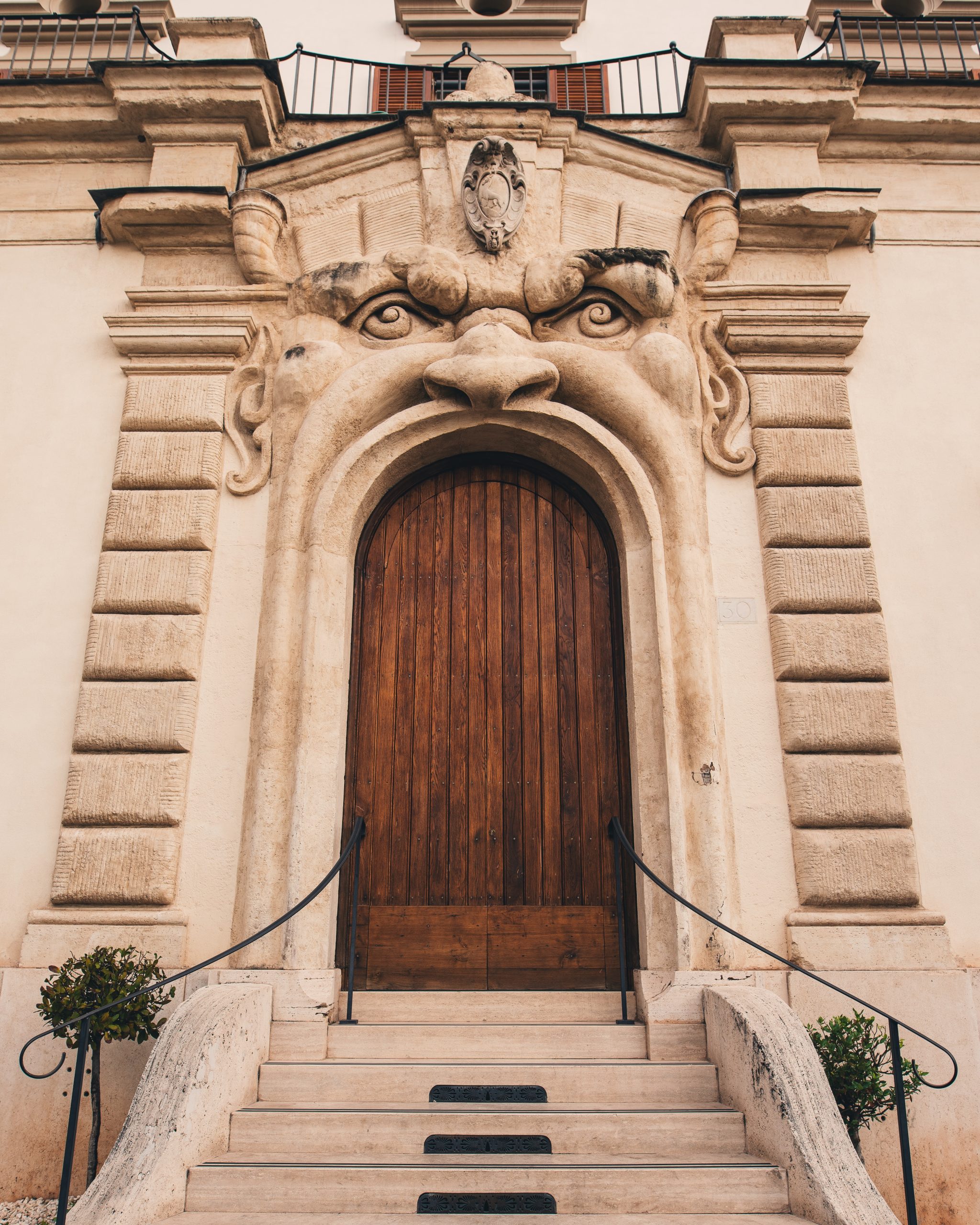 A real hidden gem of Rome, nearby Spanish steps

Everybody knows the Spanish Steps in Rome. But how many people know this hidden gem you can find on top of it? All you need to do is climb up the Spanish steps and take via Gregoriana on your right. As you walk down the street you will notice a very strange door on your left. You are in front of Palazzo Zuccari, also known as the House of Monsters of Rome!

Do not stop at surface level, this hidden gem of Rome has so many stories to tell. And if you want to know them, you are in the right place! Did you know that you can enter House of Monsters palace and see what’s inside?

But let’s start in order. What is the House of Monsters?

Palazzo Zuccari (also known as the House of Monsters)

The building takes its name from Federico Zuccari, an Italian painter who lived in the 1500s. Federico not only was a painter, but also contributed in creating one of the most important cultural gatherings of Rome. And he did that right in this palace.

Despite the wealth of decorations you’ll see inside, Federico Zuccari bought this piece of land at the end of the 1500s for an affordable price. This whole area in fact was a countryside area and Spanish steps were not even there yet! However there was already a spectacular view from up here!

He started the construction works of this building, but he unfortunately never saw it completed because of financial problems and because he died in the meantime.

The entrance door with the monster face used to be the entrance to Federico’s garden, while the main entrance to the building was in via Sistina. With this door Federico wanted to create a surprise effect to his visitors. They would enter this “scary” door, and then be surprised with the contrast of the beauty of the garden inside.

When you enter this door today you don’t find a garden anymore, but a library, the Bibliotheca Hertziana (which I am going to tell you about below). But try to imagine the effect you would have had at the time!

A palace for the artists

Federico Zuccari’s plan was not only to build a private residence but also to open an academy for all the artists coming to Rome from the north of Italy and Europe.

At that time in fact (1500s) Rome was the city of arts and there were a lot of artists coming to Rome to study and try to find a patreon to support their works.

Federico Zuccari was an artist himself and he wanted to build this palace as a place where artists could live and study together.

Federico Zuccari founded the Accademia di San Luca, an association of artists that promotes the work of painters, sculptors and architects, and still exists today!

The goal of the Accademia was to elevate the work of the artists above that of mere craftsmen, as people considered them at the time.

Artists did not want to be defined artisans or craftsmen. But rather intellectuals, members of a more elevated society.

This may sound obvious to us today, but it wasn’t back then. For example, you need to imagine that artists were paid according to the quantity of “heads” that they included in a painting. Or also according to the price of the colors that they used. That’s why when you see a painting from the 1400s you notice they are usually full of characters!

Federico Zuccari instead wanted to define the artist’s work as “poetry”. And that is something you cannot quantify by number of words, but as the result of an intellectual work.

The frescoes in the ceilings are all about this message: artists make records of the scientific discoveries of anatomy by drawing them. Artists design cities while making a new urbanization plan. Artists need to study philosophy and history to be able to draw them into frescoes and sculptures. So how could you define them as mere craftsmen?

Inside the House of Monsters: the Bibliotheca Hertziana

As you walk through the mouth of the monster today, you’ll find the Bibliotheca Hertziana. This is a German institute of research specialized in History of Arts and liberal arts. And it is financed by the Max Planck institute. Therefore the German state finances this.

The Bibliotheca Hertziana is a highly specialized library. You can only access it after a doctorate in History of Arts or Humanities.

However you have a chance to enter this wonderful place even without a doctorate. In fact, the Bibliotheca Hertziana today hosts free guided tours open to every visitor upon booking at this link: https://www.biblhertz.it/en/guided-tours

The story of the Bibliotheca Hertziana

The library was donated by Henriette Hertz (1846-1913). She was a lady coming from a lower middle class German family of Cologne.

This library has a story of over 100 years!

Everything started when Frida, a childhood friend of Henriette, married Ludwig Mond. He was a chemical entrepreneur who moved to the UK where he opened his company. Henriette’s friend Frida moved to the UK with him. But she was so unhappy over there, that Henriette moved to the UK too, to live together.

Later on they decided to move to Italy, in Rome. They bought Palazzo Zuccari, which at the time was in very bad conditions, and they restored it.

They all were very educated and Henriette started to invite intellectuals, researchers, and organized concerts. It was the beginning of the 1900s and this house became an intellectual salon.

Henriette never got married. She wanted to remain a free woman and dedicate herself fully to history of art studies.

But she had a challenge. She could not find in Rome a library specialized in history of arts.

And most of all, she couldn’t find a library that admitted women! Sounds crazy to us today, but that’s how things were only about 100 years ago..

That’s why Henriette founded this library, the Bibliotheca Hertziana (from her last name). She wanted this library to be open to all nationalities,  and to women and men alike.

Henriette had no kids and decided to leave the library to the Max Planck institute. Henriette died in 1913 and in her testament she specified she wanted this library to be open to everyone, regardless of gender or nationality.

Today this library accepts scholarships from all over the world, from 3 months to 3 years duration. Also professors and visitors with a doctorate in History of Arts or Humanities can access the books and photographic material available.

The documents of the Bibliotheca Hertziana cover history of arts, with a main focus on Renaissance in Rome. The collection includes 350000 volumes and 800000 photographs!!

Student visitors can browse the books themselves, which is like a dream if you love libraries like I do!

The Bibliotheca organizes free guided tours to any visitor, which you can book through this link: https://www.biblhertz.it/en/guided-tours

The tour duration is about 45 minutes and covers the story of the building and of the library, by a very passionate member of the institution.

A hidden gem of Rome you must absolutely visit!

Something which you cannot see, but is nice to know. Beneath the Bibliotheca Hertziana there is an archaeological area: the gardens of Lucullo and its nymphaeum.

While the amount of books grows year after year (about 5000 new books each year!), the weight of the building has been leaning on the ancient Roman ruins below.

Therefore, after extensive research, a group of engineers developed a system with micro poles which go up to 60 meters deep into the ground, without affecting the ruins and providing support to the whole library.

The sophisticated things which you cannot see beneath your feet!

The archaeological site is only open to researchers and not to visitors.

This was everything I know about this place and that I’ve learned during the guided tour. I want to thank the staff of the Bibliotheca Hertziana for being so welcoming to Live Virtual Guide for the realization of the video, blog post and pictures.

Are you going to visit this place next time you’re in Rome? Tell me all about it in the comments below!

And if you want to explore the Spanish Steps before you visit, book our Live Virtual Tour “Virtual Coin Toss into the Trevi Fountain”!