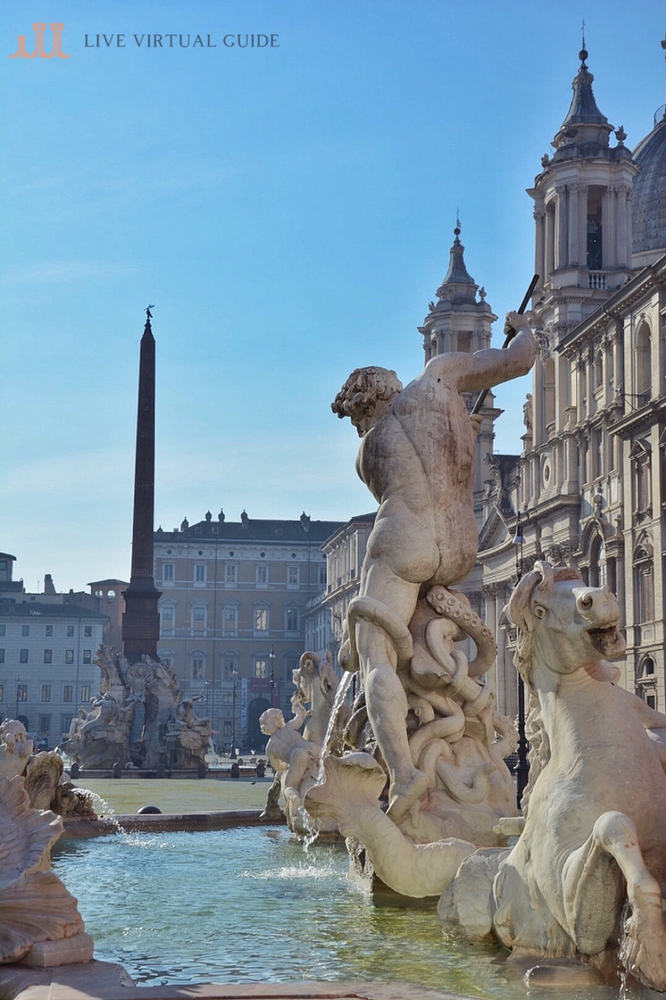 Whether you have been there already or you are about to go, these are 5 things you cannot miss in Piazza Navona:

When you get to Piazza Navona your eyes focus on many beautiful things around you, but at some point you might now be wondering: you said there was some ancient Rome in here.. where is it? Didn’t you notice the peculiar shape of the square itself?Let me show you better: That looks very much like the shape of an ancient Roman stadium, don’t you think?
The modern square sits exactly in the very place where the stadium of Domitian was! This was the arena of the stadium, and the buildings were built on top of the spectators seats, using those ruins as foundations!

Incredible, isn’t it?
The fact that the square was built on top of the ancient stadium doesn’t mean that we can’t see the stadium anymore. You can actually go underground and explore the ancient stadium of Domitian!We saw that the stadium has two short ends, one is curved, the other one is straight. What we need to do is to walk towards the curved one. As you exit the square from this end, turn left (you’ll walk past a doll’s hospital by the way).

And.. ta dah! On your left, the Stadium of Domitian!

Athletes used to compete here, in sports like boxing, running and wrestling. Here we can see the arcades of the stadium made of travertine, which was one of the entrances of the stadium. On top of this structure you would have the seats of the spectators.From here we can see very well the difference between the ancient and modern ground level, which is 5 meters!Unfortunately the place is closed while I am writing this due to Covid restrictions, but take note and go next time you’re here! Here is the link to the website: https://stadiodomiziano.com/homepage-en/

2) Fountain of the Four Rivers

Let’s go back to Piazza Navona, to the square.
I am in the center of the square and from here we have this fantastic combination of this facade built by Borromini and the fountain of the Four Rivers built by Bernini.
Why is this called the fountain of the four rivers? Because as you can see there are four guys sitting on this rock and each one of them represents a river. A river for each continent that was known at the time, in the 1600s.Let’s start from Mr Gange, the river of Asia: he has a huge oar in his hand and he is telling us that the Gange river is navigable.As we leave Gange we move to the right and we see this lion looking at his reflection on the water and this palm tree, made of travertine, but it almost looks like it is flying away with the wind. Next river is the Nile, so the African continent. His face is covered with a cloth, he cannot see; this because the springs of the River Nile at the time were still unknown.
After the Nile, we have other incredible details: fantastic animals like dragons, crocodiles, sea snakes; the back of the lion. All of these animals are the drainage holes of the fountain.Next river is Rio de la Plata, which represents the continent of America. Plata in Spanish means silver, and that is why the river is sitting on some silver coins.
There is a legend about the Rio de la Plata river, that Romans always like to tell, and it is about the legendary rivalry between Bernini and Borromini, the two geniuses of Baroque in Rome: according to the legend Bernini sculpted this river with his hand up, covering his face almost as if he is scared that the Borromini’s church would fall on him because poorly made. We wouldn’t find this too hard to believe, considering that Bernini used to make a lot of pranks like this; however it can’t be true because the fountain was completed a few years before the works on the church would begin. Some say the river is actually protecting his face from the sun, others say he is scared of the snake just above him, on the rock.
On his side we also see some cactus and a beautiful horse popping out the rock. The last river is the Danube river. He is the only river that is actually looking at the obelisk and what is he doing? He is holding the coat of arms of the Pope Innocent X Pamphilj, who commissioned this fountain and the renovation works of the entire square. Danube represents Europe, the continent where the Pope is and from where he controls the whole church.

Now that we’ve seen the fountain, let’s have a look at the church of St Agnes. First of all, the façade: Borromini pushed the façade to the back and lowered it in the center: this was an expedient to enhance the dome and make it more visible.
The first medieval church was built on the very place where Agnes was martyrized when she was only twelve years old. She was killed here, during the empire of Domitian, in the stadium. (To find out the story of Agnes, click here).
Inside, the dome is beautifully painted with the scene of St Agnes ascending to heaven. And if we look at the sides we have two beautiful marble statues of St Agnes and St Sebastian.
The church as we see it now, is a baroque remake of the 1600s.There is a medieval crypt underneath that you can visit when it’s open, and that you can see from the gratings on the floor at the center of the nave.
As I said, according to the tradition this was the exact location where Agnes was killed, which is why the church was built here and which is also why here we can find the skull of Agnes!
The crypt underground is under restoration due to the high humidity levels which are damaging the walls and frescoes; so it is not possible to visit it at this time.
For those who wish to support the restoration of the crypt, the church is giving the possibility to “adopt” a fresco! 🙂 Unfortunately it is not easy to find financial support for works of art, so on the church website donations are open to everyone at this link, where you’ll also find the before/after pictures and updates on the restoration:https://www.santagneseinagone.org/en/update-crypt-restoration-works/
When I look at these images I just think restorers can make magic, don’t you think?! 🙂

Piazza Navona is huge, and it is encircled by various amazing buildings, built on top of the cavea seats of the ancient stadium. One of them is Palazzo Braschi which hosts the Museum of Rome (a collection of postcard-like paintings depicting the city Rome between the 1600s and 1700s). I really recommend you to go and see it.Check the website for updated opening times and tickets: http://www.museodiroma.it/en

This is one of the most difficult places to visit in Rome, so if you find an available tour on the website (which is rare), just book it without even thinking about it! You might not be able to find it later, as dates are really limited.The Pamphilj palace today hosts the Brazilian Embassy. The Palace itself is beautiful, however the star of this place is the Cortona Gallery with the stories of Aeneas.This is the website:http://roma.itamaraty.gov.br/it/prenotazione_visita_guidata.xml (website is only in Portuguese and Italian)