12 facts about the Sistine Chapel in Rome

by Federica | Must sees in Rome | 0 comments 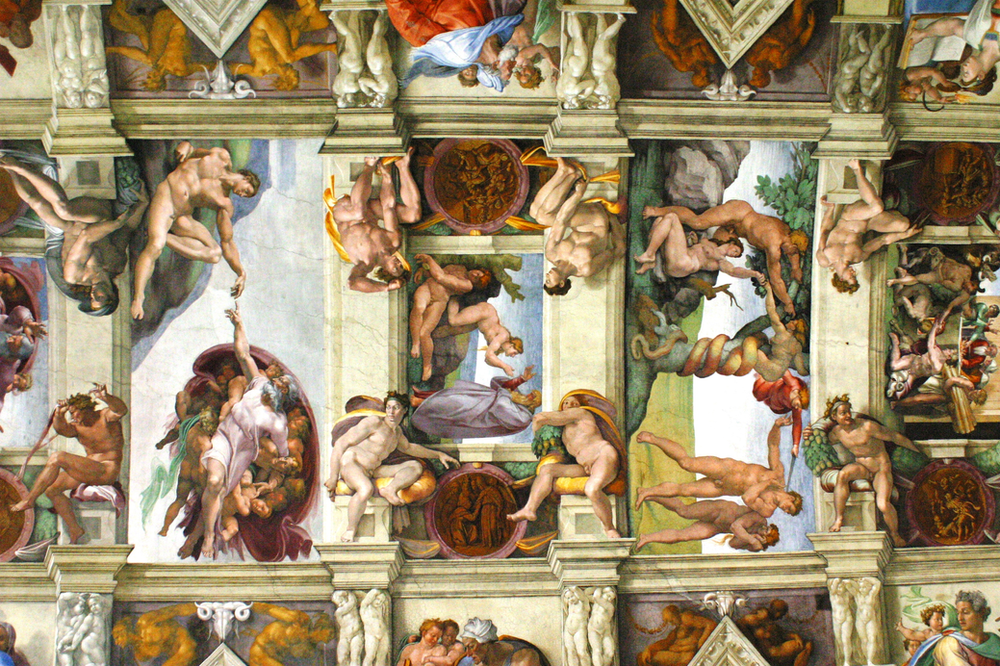 Probably one of the most known places on the whole planet, the Sistine chapel in Rome is something you cannot absolutely miss when you visit the Eternal city. Yes, it is a place really ON the beaten track, but there is a reason for that. 🙂

The Sistine chapel can be overwhelming when you get there and considering the distance from the ceiling (21 meters/60 feet) and the wall paintings, you might not enjoy to the fullest the marvels around you. That is why I recommend you to hire a tour guide to make the most of it when you’re there, as there is a lot to decipher from those frescoes!

Here I made a list of 12 key facts which are nice to know before you get there (or after you’ve been):

1) What is the Sistine chapel?

It is a consecrated chapel where important liturgical celebrations take place.It is also the place where the conclave, the Popes’ election, takes place.It eventually became also a wonderful cradle of Renaissance art.

It takes the name of the Pope who decided on its construction: Sixtus IV, Francesco della Rovere, elected pope in 1471. Sixtus IV wanted to renovate the image of Rome to renovate the strength of the Church; he embarked on a huge “image” campaign which consisted in renovation and building works in the city of Rome. He built the Ponte Sisto (Sisto bridge), founded the Capitoline museums and more. Sixtus IV decided to create a chapel that could amaze anyone who saw it, it had to be the most impressive place where a Pope could celebrate in.

3) We all know how it looks inside, but how does it look on the outside?

From outside the Sistine chapel has a very severe look: it is a rectangular building covered in bricks, with a closed balcony running around the whole perimeter, like the ones of castles, for the guards to protect the chapel in case of siege.

4) Who painted the Sistine chapel?

The chapel is world-renowned mostly for Michelangelo’s vault and Last Judgement. But Michelangelo was not the only artist that worked there. In fact, for the wall paintings on the sides there has been a real dream team of the greatest artists from the 1400s, which were:

5) Okay, those are a lot of people. But why are all those frescoes so homogeneous? They look like the same person painted them all.

This is because Perugino, the coordinator of the works, set the standards for all since the beginning:

6) Was Michelangelo’s painted ceiling in the original plan?

Not at all! Initially the vault was simply blue with golden stars, a starred sky, painted by Piermatteo d’Amelia.In 1504, the ground beneath the Sistine chapel settled, which resulted in the southern wall to lean, creating a huge crack across the vault. The chapel was then considered dangerous and remained closed for months. This is where Michelangelo jumps into the scenes! The starred vault of Piermatteo d’Amelia was badly damaged. Therefore in 1506 Julius II (the Pope elected in 1504) decided to give a new look to this place and asked Michelangelo to do so.

7) What were Michelangelo practical challenges to paint the Sistine chapekceiling?

8) How do you make a fresco? Why is it so difficult?

The biggest challenge of a fresco is the timing: you must be fast. You put a layer of fresh plaster on the surface and then lay the color on it.The plaster must be “fresco” (fresh) when you lay the color on it, because it’s going to absorb the colors and dry them out to last long. So you need to lay the plaster one section at the time and apply the colors by the end of the day, because it will have to dry out during the night.

9) Why is the Last Judgment so rich in blue, while there is virtually none on the vault?

10) Did you know that the “touch” of the creation of Adam, is not Michelangelo’s?

Exactly. This was due to the fact that at some point a crack opened on the vault, and the piece of fresco with the three fingers of Adam fell from a 21 meters'(69 feet) height breaking into dust. Michelangelo was already dead at the time, so another artist, Domenico Carnevali in the XVI century reproduced that section exactly as the original.

11) Why are some of the body’s “private parts” in the Last Judgements covered while others are not?

When in 1541 the Last Judgement was completed, tt received a lot of compliments and also a lot of criticism. Too many naked bodies. We need to understand the period of the Counter reformation: Calvinists and Lutherans were criticizing the church of Rome going back to paganism. Those naked bodies were a problem in the context.

12) Did you know you can visit the Sistine chapel from anywhere at any time?

Have you ever been to the Sistine chapel? Share your thoughts below!